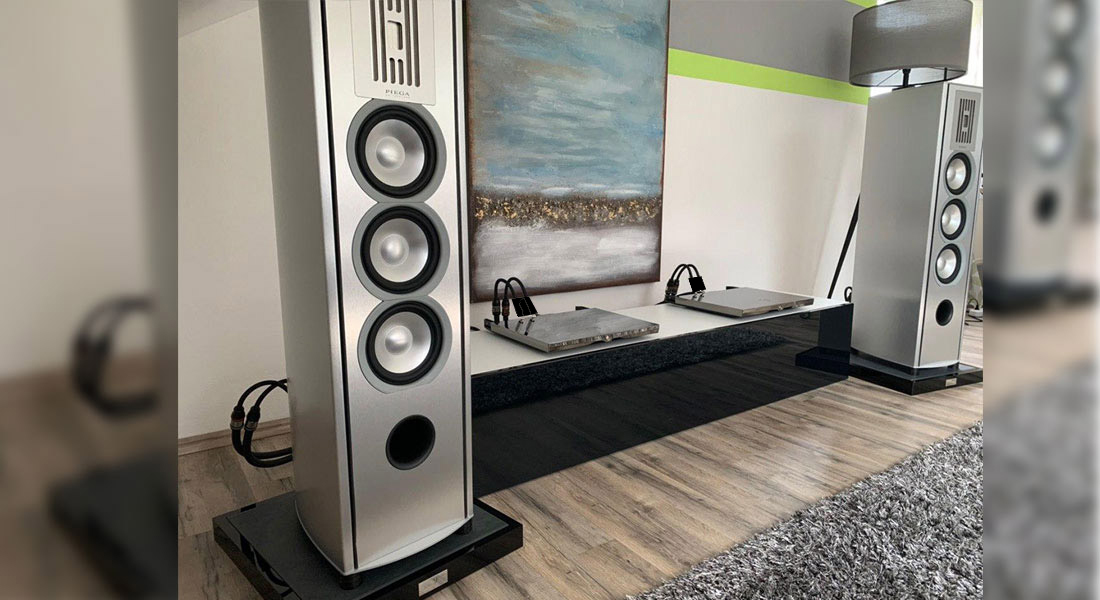 On Subbase Audio, I came across floor plates for my speakers while browsing the Internet. After a short browse on the website, I was very convinced of the described concept or philosophy of Subbase Audio and was able to identify with it immediately.

So I once wrote to Thomas Schlipper without obligation and had advice on which products make the most sense for getting started in the concept.

After several e-mail contacts and the first conversation by phone, I have to record one thing in advance: the time Thomas Schlipper took for me to bring his products closer to me and to answer my questions is really noteworthy. It is easy to see that the focus is not on commercial advice, but on a satisfied customer with, if it turns out, a sustainable and long-lasting product from him at his side.

After a few weeks it was time. The first products have arrived at home.

I decided to clean up the way from “back”. In other words, to optimize the areas where the signal is the last in the playback chain to be inferior and is affected. Specifically for products, this meant: Echo LS base plate for the loudspeakers, Ebony LS coupling feet to these and the Ponts as a bridge for the loudspeaker cable.

When unpacking the packages, a lot of it immediately unpacks one. Absolute perfection in terms of workmanship quality and feel of the products. The design follows a line and speaks for itself. Thomas Schlipper had previously set the bar very high. Speech in the floor plates of immense improvements in the sound. Logically, skepticism grew with the predicted improvements.

Thomas recommended that, in order to make a “gradual improvement” possible, the purchased products would be built up peu peu.

First, I placed the Echo LS floor plates under the speakers.

The first track was running and I found that the result didn’t meet my expectations and didn’t change much of the sound. A little disappointment spread in me. I waited and listened to two more songs. After about ten minutes, however, I noticed how something was changing in the sound. The bass became deeper and more controlled, the instruments became clearer and more finely drawing.

Another effect occurred that I hadn’t heard before. You know this “value” very well in the TV area. It is about the so-called black value. In terms of sound, this corresponded to a less noisy sound and a certain calmness in the songs.

Immediately my feelings turned and a grin spread to my face. In the course of the first hour, you could hear significant improvements. Thomas also made it clear before the purchase that the sound will change again within a week.

After the Echo LS was built, the Ebony LS feet were placed between the speaker floor and the Echo LS. Physically, a tripartite installation was recommended here, which is more vibration-resistant in itself. The Ebony LS made of ebony was processed so perfectly that they even “sucked” at the bottom of the panels. The goal here was to achieve a certain coupling, which brings a certain honesty into the music again. Many Hi-Fi lovers use granite slabs without a kind of feet and forget about the appropriate coupling. Let us remember the third Newtonian axiom (actio = reactio) in this coupling principle.

Soundfully, the Ebonys are easy to understand and take another step towards “true” music enjoyment. With the ebony feet, the music becomes even more grippy, airier, more spatial.

In the end, the Ponts were supplemented. This type of insulation of the cable from the ground is phenomenal. Again, an astonishing result. The music stands out from the ground, becomes more relaxed, many of these descriptions of this kind apply here. Of course, each person has a different ear, but with two other audiophile friends this phenomenon could be confirmed.

The most serious thing is, however: I used cable bridges (other material) before, because the effect itself was not new to me. The improvements to my old cable bridges have doubled with the ebony ponts! I didn’t thought that was possible!

After a week, as Thomas predicted, the soundscape is finally snapped in again. This is due to the mass of the speakers and the “setting” of the material structure in the Echo LS. It is not really possible to say exactly where something has changed and how again. Rather, it is to look at the whole and the clear gain in feelings during playback.